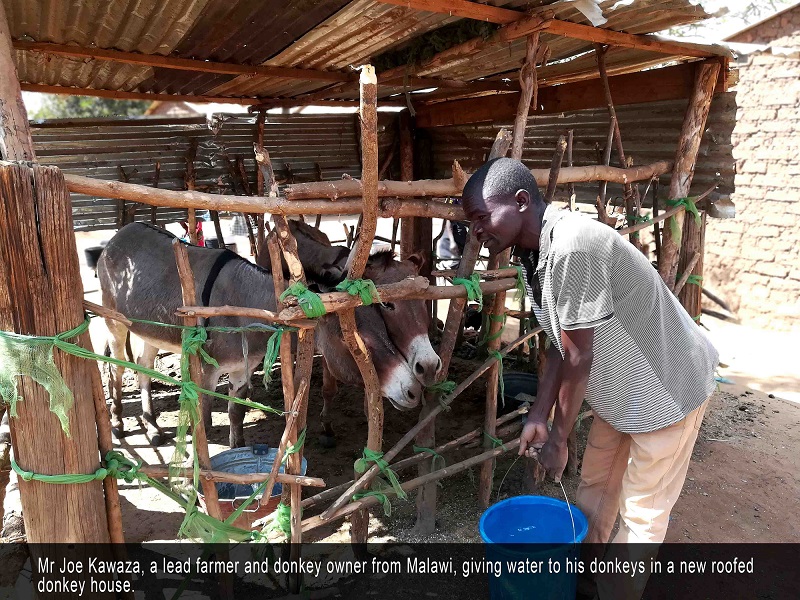 Proper housing management and proper feeding are essential to animal well-being and welfare. Healthy donkeys just like any other animals can tolerate extreme temperatures if they adapt and have adequate feed and plenty of water. However, shelter can greatly improve the welfare of the donkey and reduce production losses.

Lilongwe Society for the Protection and Care of Animals (LSPCA) together with the Donkey Sanctuary Project-UK continues to work with Malawian donkey owning homes in promoting donkey health and welfare. LSPCA has noted a positive change by some donkey owners in the implementation of donkey management best practices. Among others these include; an improvement in donkey housing mainly roofing, and a change in feeding patterns.

This follows a recent monitoring and evaluation activity which LSPCA with support from the Donkey Sanctuary Project-UK carried early this month (July, 2020).  The activity has showed that, with LSPCA’s intervention, some donkey owners have now built roofs for their donkey houses, stocked enough feed for their donkeys, and are now providing plenty of clean drinking water to their donkeys. This is very different to what LSPCA found when it visited the same donkey owners earlier this year in February. The previous monitoring activity of February showed that donkeys were kept in unroofed houses and rarely given supplementary feed and were drinking unclean water.

Mr Joe Kawaza, a lead farmer from M’gwanga, is one of the donkey owners under the mentorship of LSPCA. He is leading by a good example; he has now built an Iron sheets roof for his donkey house. Earlier, Mr. Joseph never kept his donkeys under a roofed house; the donkeys succumbed to scorching sun and moisture from rainfall year after year. Following LSPCA’s advise, Mr Joseph has also stocked enough supplementary feed which he now gives it to his donkeys three times in a day. The feed is a mixture of maize bran, roasted soya powder, and some sprinkles of kitchen salt.  Further to that, Mr Joseph now makes sure that his donkeys drink clean and enough water before releasing them to work in the fields.